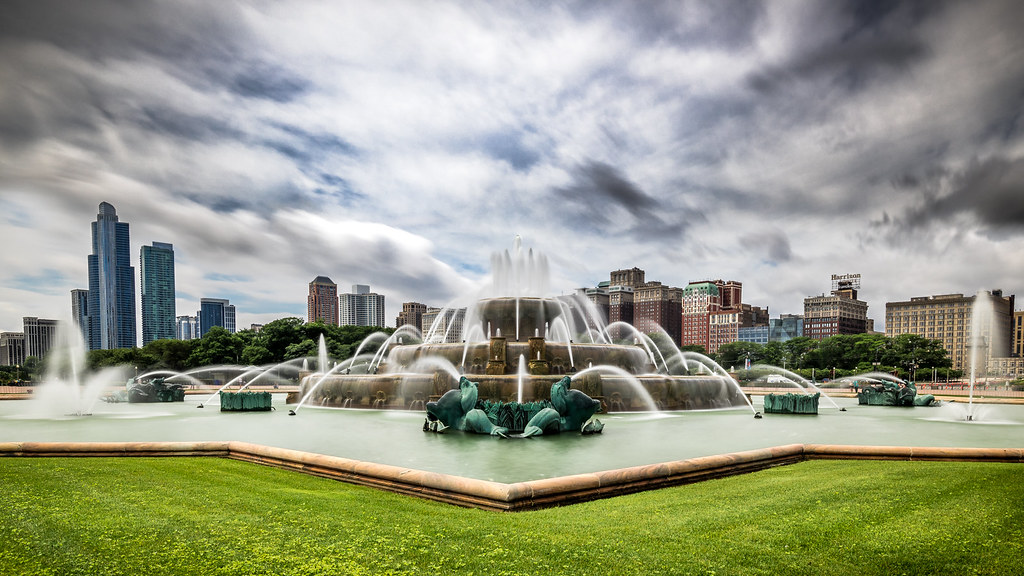 Buckingham Fountain is without doubt one of Chicago‘s favorite landmarks, as the centerpiece of the 500-acre Grant Park. This sculptural fountain is a must-see for visitors and residents alike. The rich history and impressive presence have made it a pillar in Chicago’s culture.

When is Buckingham Fountain Open?

Buckingham Fountain is open seasonally due to the severe winters in Chicago. You can see the fountain in all its glory from May- October, every day, on the hour from 9 a.m. to 10:35 p.m. The display lasts a spectacular 20-minutes and is even more fascinating at night with the lights added.

The Clarence Buckingham Memorial Fountain officially opened on the 26th of May in 1927, but much earlier its story began. In the late 19th and early 20th Centuries the Buckingham’s were a large family of artists and

philanthropists in Chicago. A successful businessman, Clarence Buckingham held several prominent positions, including the Art Institute director over a decade. In 1913, when he died unexpectedly, his sister Kate Sturges Buckingham maintained his love of the arts and provided the loans and donations for the Institute of Art, while financing the maintenance and expansion of the collection.

In 1924, she donated a sum of a million dollars to the city to build and maintain a beautiful fountain for her brother as a permanent monument.  Work began in 1925 and lasted two years, with an estimated 50,000 attendees attending the official dedication on the 26th of August in 1927. Ten years later, Kate passed away.

The fountain’s “wedding cake” structure was designed by architect Edward H. Bennett from the company Bennette, Parsons and Frost, with the addition of sculptural elements by the French artist Marcel Loyau. The Bassin de Latone in the Palais de Versailles near Paris, France inspired him but with an additional theme of Lake Michigan. The fountain also has four ornate basins made of granite and pink marble and there are four bronzed seahorse sculptures that represent the four states bordering the lake, namely Illinois, Indiana, Michigan and Wisconsin.

Where is Buckingham Fountain Located?

Located in the center of Grant Park, the Buckingham Fountain is between Queen’s Landing and Congress Parkway. The exact address is: 301 S Columbus Dr. Chicago, IL 60605. If you head straight East towards the lake on Congress Parkway, you will end up directly in front of it. There is paid parking at any of these parking garages:

How big is Buckingham Fountain?

The fountain is equally impressive from an engineering standpoint, as it is visually. During displays, its 133 jets use up to 15,000 gallons of water per minute, spewing water up to 150 feet in the air, and its 820 lights, display even more special at night. The bottom pool of the fountain is 280 feet in diameter, the lower basin is 103 feet, the middle basin is 60 feet and the upper basin is 24 feet. The top of the upper basin stands 25 feet above the water in the lower basin.

The fountain has its original underground pump house with two levels. The control room is located on the first level, and the lower level pump room is 35 feet long, 25 feet wide. The original pumps and motors are still in operation today.

Incredibly, during the first 50 years of its existence, the fountain displays were operated manually and were not fully automated until 1980. Chicagoans immediately took the fountain to heart and contributed to Grant Park’s listing in 1993 to the National Register of Historic Places and in 2000 it was designated as a Chicago landmark.